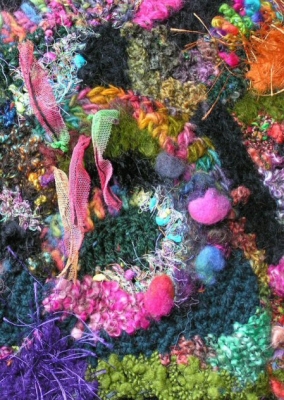 Now, as I was saying, about the postmodern knitting thing. I’d rejected knitting as a metaphor for a multi-strand narrative, but almost as soon as I said it, I thought of stranded colour knitting (‘Fair Isle’) and remembered the free-form knitting I’d spotted on a net-trawl.

Jenny Dowde is an Australian artist who works in a range of mediums including fibre and polymer clay. She teaches workshops and has written several books.

I was quite taken by the images on her site – do check out Jenny’s blog – fantastic ‘scrumbles’, chaotic accretions of yarn and fiber, knitting and crochet, colour and texture. Like Jenny Kee having a major dummy-spit or a craftier version of Jackson Pollock. Pattern? What pattern? I make the stitches, I carry the strand, clickity clickity, clickity. …. … … … …..

I wondered how you could make a structured garment out of such chaos, but when Jenny kindly sent me some images to publish here on my blog, I saw that the edges can be knitted onto, pattern added, as desired – in some senses more accurately than when following a pattern, because – at least for an inexperienced knitter like me – the pattern is something you follow blindly, while with free-form, you modify it as you see it develop.

When I write, I find it almost impossible to plot. I start out with the roughest idea and see where it goes. Pattern knitting is like writing to a plot – not very exciting really, because all the decisions are already made, and there is no room for error. So in a sense, not only is freeform knitting postmodern for its multitude of strands, but also because of its plotlessness.

« postmodern knitting and the circular narrative
a photographer’s eye: sugimoto »